Poland is not a linguistic monolith at all. The communist authorities, which took over the country after World War II, did everything to destroy ethnic minorities and eliminate all signs of difference. Often, it is only thanks to the determination of individuals that many local traditions and customs have been successfully forgotten. Specifically understood "polonization" led to almost complete disappearance of, for example, the Wymysorys (Vilamovian) language.

The release from the Russian sphere of influence caused a kind of explosion of activities of local enthusiasts trying not only to save from oblivion, everything that has been managed so far. It is also taking many interesting initiatives. We can only enjoy the fact that among them is also popular around the world the custom of translating into local languages and dialects of the "Little Prince".

However, even taking into account all this, the number of translations published in Poland may already surprise. And it doesn't have to be over! 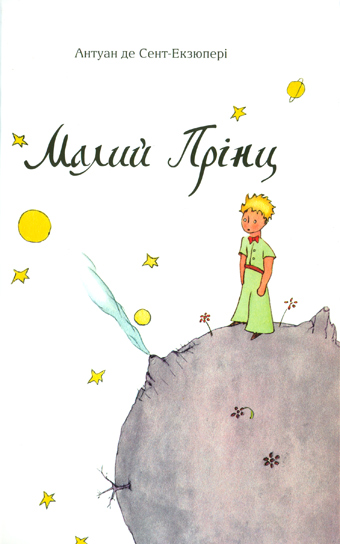 * Малий Прінц тіж є Лемко! * Yes! The first publisher of Antoine de Saint-Exupery's work "Le Petit Prince" in their language (лемкiвскiй язык) in 2013 was the Lemko community. "Малий Прінц" found its way to readers thanks to the efforts of the Association of Lemkos Culture Lovers (Stowarzyszenia Miłośników Kultury Łemkowskiej) in Strzelce Krajeńskie. Importantly (you can see on the cover) the book is written in Cyrillic. 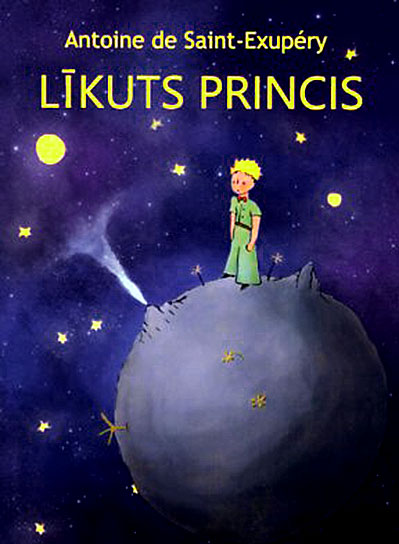 Prussian? Of course! In the iconic Polish movie "Miś" there was a Prussian heir. More specifically, Sir Prussian heir, because his name is Prussian: Prussian Lawrence. But for the Prussian language?

And yet! Prussian language is the language of the Baltic Prussians, extinct somewhere at the turn of the seventeenth / eighteenth century. Several hundred years later, a group of enthusiasts found themselves trying to reconstruct and revive him. "Līkuts Princis" - "Le Petit Prince" in Prussian - is one of the fruits of these attempts.

The book published on January 27, 2015 is the result of the passion of Piteris Šatkis, as translator Piotr Szatkowski signs in Prussian, Shortly after the book was released, Piotr Szatkowski gave malyksiaze.net a short interview.

The publisher of the book is the Prusaspirā Association (Stowarzyszenia Prusaspirā). 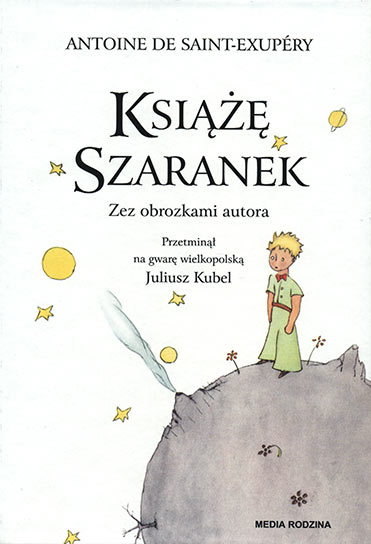 The appearance of translations of "The Little Prince" into Lemko and Prussian in Poland was a clear sign that the bag of Polish language minorities was solved for good. At a time when the lovers of the Antoine de Saint-Exupery tale wondered who would be next: Silesians or Kashubians, shortly before Christmas, on December 21, 2016 , the issue in the dialect of Greater Poland appeared quite unexpectedly.

This time, behind the publication of the book entitled "Książę Szaranek" was not an association of enthusiasts, but a serious publishing house - Media Rodzina, known in Poland among others from the Harry Potter book series. "Little Prince" in the dialect of Greater Poland, as the cover informs, translated by writer Juliusz Kubel - as we read on the publishing house page: creator of the character of Old Marych, Poznanian from the eighth (sic!) Generation, author of scripts for radio plays (Old Marych Blubry and Blubry Heli at Sunday), performing arts and song lyrics. Honorary Citizen of Poznań, as well as a councilor in the Poznań City Council. Despite the dignity of the translator and the inscription for the cover "in the dialect of Greater Poland", the inhabitants of southern Wielkopolska prefer to claim that the book is published in the dialect of Poznan, because the book contains many words typical of Poznań residents, unknown or unused in the south.

The book is accompanied by a glossary of Greater Poland dialect and a CD with an audiobook. "Książę Szaranek" is read by the translator Juliusz Kubel. 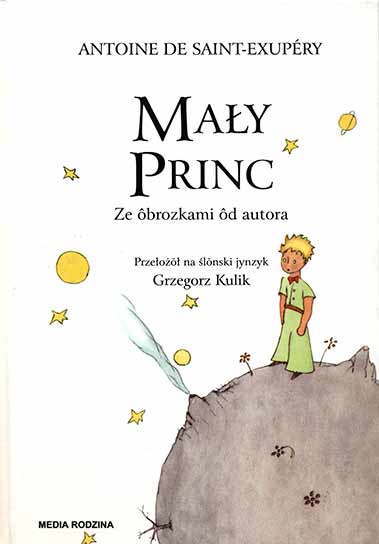 - Niy spodziywoł żech sie, iże przidzie mi przełożyć „Małego Princa” na ślōnsko mowa - admits in Silesian of course Grzegorz Kulik on his website. - Jak ino wydownictwo spytało ale mie, czy bych chcioł, toch zaroz ôdpedzioł, iże toć, że chca.
(I did not expect that I would translate the "Little Prince" into Silesian language. As soon as the publishing house asked me if I would like to, I immediately replied that of course I want to.)

The publishing house mentioned by the translator is already known to us Media Rodzina, which was a publishing success by publishing "The Little Prince" in Greated Poland dialect. "Mały Princ" - the Silesian translation of the book, was released on October 15, 2018 - two years after the Greater Poland version.

As before, Media Rodzina has equipped the publication with a Silesian-Polish glossary and a CD with an audiobook. The book is read by the famous actor and director in Silesia, Mirosław Neinert. 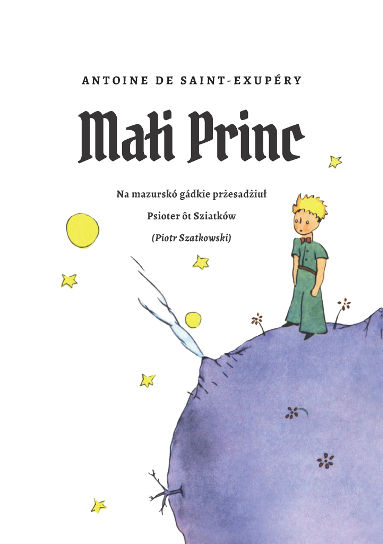 Piotr Szatkowski? We know! This is Piteris Šatkis - translator of the "Little Prince" into Prussian. This time as Psioter ôt Sziatków appears on the cover of the book "Małi Princ". Masurian version of the name, because "Małi Princ" is "Le Petit Prince" in the Masurian dialect.

The book, which was published at the end of 2018, is the result of 18 months of work of a translator, who is also the publisher of this unusual publication together with Paweł Pogorzelski. 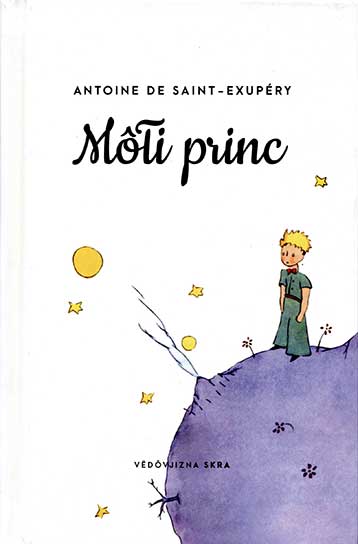 It is hard to believe that Kashubians had to wait so many years for "The Little Prince" in their language. The more unbelievable that the Little Prince spoke his first words in Kashubian a long time ago! A few chapters of the book into Kashubian were translated and published on the Internet by a student of the University of Warsaw. The project probably did not have a happy final, and the translated fragments, probably due to the end of education, disappeared along with the student's page.

Nature, they say, doesn't like a vacuum. So Maciej Bandur appeared and announced on the portal zrzutka.pl: I will translate, but you have to drop it on printing. And it happened. In 2018 - a lucky year for the Little Prince in Poland - "Môłi princ" was released.

In the publication, in addition to the Kashubian-Polish glossary of rarer words and phrases, a name list of those who financially supported the project was published. 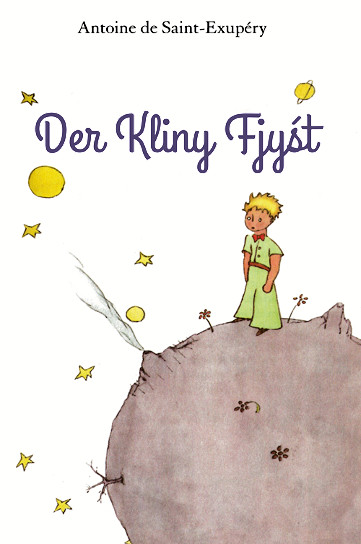 When in June 2019 the exhibition "Little Prince. Almost all editions from the planet Earth" opened in the Museum of the City of Ostrów, the director of the museum Witold Banach asked about the Wymysorys language. At that time, we did not realize that work on the Wymysorys version of "The Little Prince" - "Der Kliny Fjyśt"was already underway.

Joanna Maryniak and Tymoteusz Król worked on it. The latter is a great lover of Wymysorys language, propagator of Wymysorys language revitalization, author of hundreds of hours of recordings of native language users, and co-creator of dictionaries and grammar. Tymoteusz Król is also the initiator of the application to the Library of Congress for entering Wilamowski in the register of world languages ​​and assigning the ISO code, which took place in July 2007 (ISO 639-3). 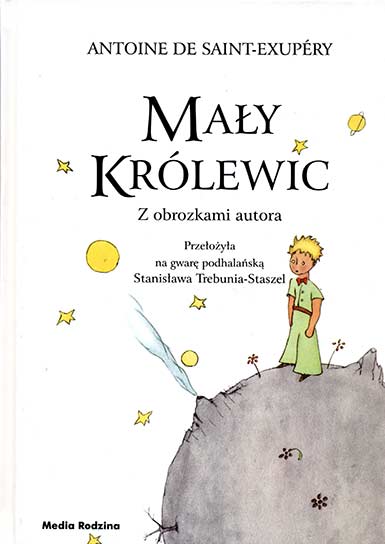 For over half a year, enthusiasts of the "Little Prince" have been waiting for its version released in the dialect of Podhale. Several times the publisher has moved the announced release date.

Like "Książę Szaranek" - a book in Greated Poland dialect and "Mały Princ" - a book in Silesian, the Podhale version was prepared by publishing house Media Rodzina. As in previous cases, the book is accompanied by a CD with an audiobook: "Mały Królewic" reads Stanisław Trebunia-Staszel. It was she who undertook to translate the work of Antoine de Saint-Exupery, because the Podhale dialect does not hide secrets from her. Stanisława Trebunia-Staszel is a highlander, ethnologist, vice president of the Podhale Society of Friends of Sciences (Podhalańskie Towarzystwo Przyjaciół Nauk) and the Podhale Association in Poland (Związek Podhalan w Polsce). She is also the artistic director of the International Mountain Folklore Festival (Międzynarodowy Festiwal Folkloru Ziem Górskich) in Zakopane.

And a small sample of text: our favorite quote. 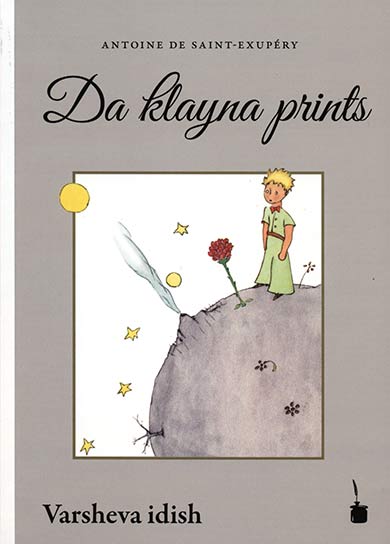 When discussing the editions of "The Little Prince" related to Poland, one cannot ignore one more publication. It is true that "Da klayna prints" did not appear in Poland, but it is undoubtedly a language that for many people on the Vistula River several decades ago was the language of everyday life.

More about the book published by the German publishing house Edition Tintenfass in the article Yiddish of Warsaw..